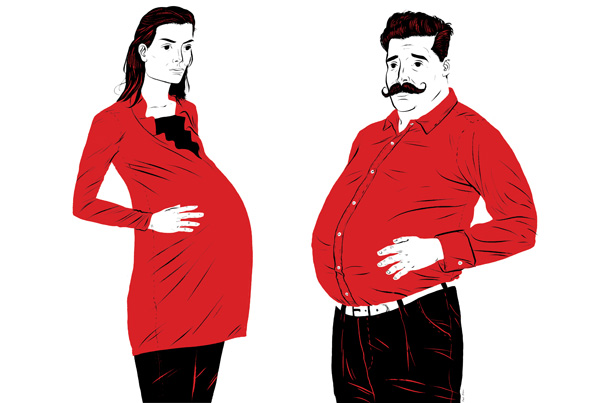 All this advice rains down on expectant mothers for the obvious reason that mothers carry babies and create the environments in which they grow. What if it turned out, though, that expectant fathers molded babies, too, and not just by way of genes?
Biology is making it clearer by the day that a man’s health and well-being have a measurable impact on his future children’s health and happiness. This is not because a strong, resilient man has a greater likelihood of being a fabulous dad — or not only for that reason — or because he’s probably got good genes. Whether a man’s genes are good or bad (and whatever “good” and “bad” mean in this context), his children’s bodies and minds will reflect lifestyle choices he has made over the years, even if he made those choices long before he ever imagined himself strapping on a Baby Bjorn.
Doctors have been telling men for years that smoking, drinking and recreational drugs can lower the quality of their sperm. What doctors should probably add is that the health of unborn children can be affected by what and how much men eat; the toxins they absorb; the traumas they endure; their poverty or powerlessness; and their age at the time of conception. In other words, what a man needs to know is that his life experience leaves biological traces on his children. Even more astonishingly, those children may pass those traces along to their children.
Before I began reading up on fathers and their influence on future generations, I had a high-school-biology-level understanding of how a man passes his traits on to his child. His sperm and the mother’s egg smash into each other, his sperm tosses in one set of chromosomes, the egg tosses in another, and a child’s genetic future is set for life. Physical features: check. Character: check. Cognitive style: check. But the pathways of inheritance, I’ve learned, are subtler and more varied than that. Genes matter, and culture matters, and how fathers behave matters, too.
Lately scientists have become obsessed with a means of inheritance that isn’t genetic but isn’t nongenetic either. It’s epigenetic. “Epi,” in Greek, means “above” or “beyond.” Think of epigenetics as the way our bodies modify their genetic makeup. Epigenetics describes how genes are turned on or off, in part through compounds that hitch on top of DNA — or else jump off it — determining whether it makes the proteins that tell our bodies what to do.
In the past decade or so, the study of epigenetics has become so popular it’s practically a fad. Psychologists and sociologists particularly like it because gene expression or suppression is to some degree dictated by the environment and plays at least as large a role as genes do in the development of a person’s temperament, body shape and predisposition to disease. I’ve become obsessed with epigenetics because it strikes me as both game-changing and terrifying. Our genes can be switched on or off by three environmental factors, among other things: what we ingest (food, drink, air, toxins); what we experience (stress, trauma); and how long we live.
Epigenetics means that our physical and mental tendencies were not set in stone during the Pleistocene age, as evolutionary psychology sometimes seems to claim. Rather, they’re shaped by the life we lead and the world we live in right now. Epigenetics proves that we are the products of history, public as well as private, in parts of us that are so intimately ours that few people ever imagined that history could reach them. (One person who did imagine it is the French 18th-century naturalist Jean-Baptiste Lamarck, who believed that acquired traits could be inherited. Twentieth-century Darwinian genetics dismissed Lamarckism as laughable, but because of epigenetics, Lamarckism is staging a comeback.)
The best-known example of the power of nutrition to affect the genes of fathers and sons comes from a corner of northern Sweden called Overkalix. Until the 20th century, Overkalix was cut off from the rest of the world, unreachable by road, train or even, in wintertime, boat, because the frozen Baltic Sea could not be crossed. Thus, when there were bad harvests in Overkalix, the children starved, and when there were good harvests, they stuffed themselves.
More than a decade ago, three Swedish researchers dug up records from Overkalix going back to 1799 in order to correlate its children’s health data with records of regional harvests and other documents showing when food was and wasn’t available. What the researchers learned was extremely odd. They found that when boys ate badly during the years right before puberty, between the ages of 9 and 12, their sons, as adults, had lower than normal rates of heart disease. When boys ate all too well during that period, their grandsons had higher rates of diabetes.

Judith Shulevitz is the science editor for The New Republic.