Making Family Out of Friends By ELAINE LOUIE Published: September 26, 2012 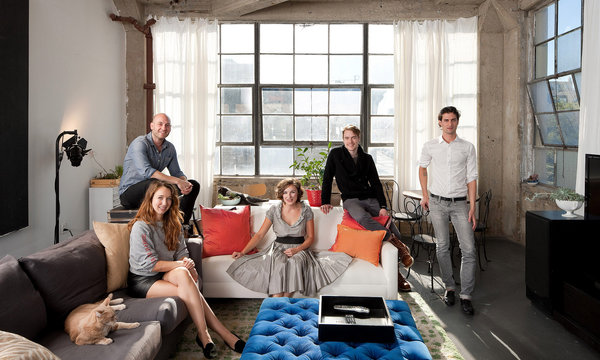 In Bushwick, five friends (two architectural designers, two fashion designers and one advertising executive) rented 2,700 square feet of raw space and agreed to fix it up.


IN a slowly gentrifying section of Bushwick, Brooklyn, where gunshots are no longer heard and the local brothel has been turned into a family home, five friends made a 10-year commitment.

The group — two architectural designers, two fashion designers and one advertising executive, all in their 20s — rented 2,700 square feet of raw space and agreed to fix it up and live there for a decade. Two years into that commitment, it seems to be going pretty well. Which is not to say there haven’t been rough patches, or what they call “family moments.” As one of the roommates said, “We fight like siblings.”

But before you can have family moments, you have to have family, and the origins of this particular family can be traced to 2006, when Corey Schneider, an architectural designer with S. Russell Groves in Manhattan, met Margo Lafontaine, the design studio director at Vera Wang. At the time, Mr. Schneider, now 28, and Ms. Lafontaine, now 29, were living in a building a block away. They became friends, dropping by each other’s apartments to borrow food and small change.

Eventually, they met each other’s friends. Max Lemberger, an account executive at an ad agency who is now 25, was Ms. Lafontaine’s roommate (and later her boyfriend). Aubrey Fry, now a 29-year-old women’s-wear designer for J. Crew, was one of her co-workers, an intern at Vera Wang. And Ryan Welch, a latecomer to the group who is now 29, worked for O’Neil Langan Architects and had gone to Kansas State with Mr. Schneider.

As they got to know one another, they discovered they had a lot in common. All were exceptionally handy, and most were designers.

It was Mr. Schneider and Ms. Lafontaine — “We call them Mom and Pop,” Ms. Fry said — who initiated the move. Someone they knew was living in an old knitwear factory and told them about a space available there, a loft with little more than concrete floors and ceilings, plumbing and electricity. The rent was $4,500 a month.

On July 1, 2010, four of them moved in. (Mr. Welch wasn’t in the picture yet.) Mr. Schneider provided the design: a minimalist scheme with four bedrooms, two showers, one toilet and wide, open spaces for entertaining.

In the beginning, things were a little rough. After work, they would all put in what amounted to a second workday, building out the loft. Around 10:30 p.m., they would leave to shower. (For the first week, there was a toilet, but no shower, Mr. Schneider said, so “we used friends’ homes.”) Then they would return to sleep on mattresses on the floor.

They hauled up 4.4 metric tons of drywall in the freight elevator and built, spackled and painted walls. They built cabinets, loft beds and shelves, and poured cement to create a kitchen island. “We did it the hard way,” Mr. Schneider said.

Then one night, Mr. Welch showed up. He had been planning to live with his girlfriend, but they had broken up, he said, and “I had nowhere to go.” Though there was “sawdust everywhere,” he continued, “I liked the finish, the concrete and the old industrial windows.” He wanted in.

About two years later, the construction is done, for a cost of $17,000. And when the roommates fight, it’s usually about the furnishings.

As Ms. Fry said: “Corey has a very minimalist style. Margo and I are designers and collect stuff. We’re more the cluttered type.” That means that decorating the public spaces can often result in a family moment. Once they come to an agreement, though, the rule is, whoever buys a piece of furniture owns it. That way, whenever the roommates split up, they can take it with them.

But there is little talk of splitting up at the moment. They are a family, and they are currently having a minor family moment over whether to get a dishwasher. Is it really necessary? And who would be responsible for loading and unloading it?

To buy or not to buy?

A version of this article appeared in print on September 27, 2012, on page D6 of the New York edition with the headline: Making Family Out of Friends.
Posted by GeorgesBays Positive Outlook at 7:07:00 PM