AN APPRAISAL: Sheriff Who Gave Stature to Small-Town Smarts 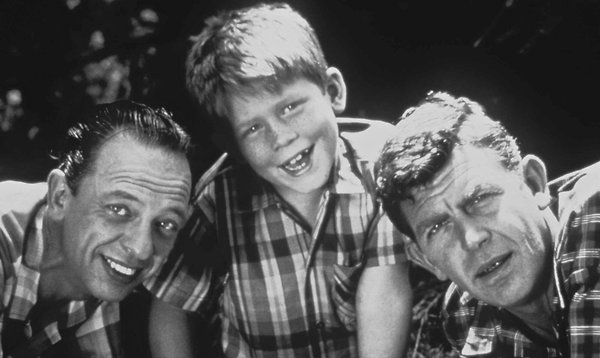 
You could argue that the defining issue in the culture and political wars that dominate American life isn’t health care or big government or religion. It is whether small-town is smarter than urban, or vice versa. And that makes Andy Griffith, who died Tuesday at 86, a pivotal figure in those wars. Not for the man he was, but for the character who made him a fixture in American living rooms: Sheriff Andy Taylor of Mayberry.
Related

A sortable calendar of noteworthy cultural events in the New York region, selected by Times critics.
Go to Event Listings »
Sheriff Taylor, among the most popular and enduring characters television has produced, came along at a time, 1960, when things weren’t looking so good for the rural-is-smarter argument, especially as it pertained to the South. News coverage was making the whole country aware of the ugliness of racism there, an impression that would only grow stronger over the next few years with clashes over school integration and the murder of civil rights workers.

A stereotype defined by ignorance and bigotry was becoming codified in popular culture as well, especially in relation to Southern characters: the obvious miscarriage of justice in “To Kill a Mockingbird,” published in 1960; Rod Steiger’s good-ol’-boy police chief from “In the Heat of the Night” in 1967. Mr. Griffith himself nudged that archetype along with the 1957 film “A Face in the Crowd,” playing a Southern drunk who accidentally ends up in the fame-making machine and turns into a demagogue. That same year, a lighter but still unflattering counterpart turned up on television in the sitcom “The Real McCoys,” about a backward family of farmers from West Virginia who relocate to California. If such stuff was representative of small-town America, yeah, better bring in some Ivy League brains to set things straight.

But hold it, as Andy was known to say. While the urbanites were ascendant, characters like Atticus Finch in “Mockingbird” and Sheriff Taylor of “The Andy Griffith Show” were keeping the flame of Main-Street nobility and wisdom alive. In Andy’s town, the fictional Mayberry, a place modeled on Mr. Griffith’s real hometown, Mount Airy, N.C., slick, eggheaded urban types didn’t generally swoop in and solve problems. More often, they were the problem.

That was established right from the start, when Andy stepped out of his police cruiser in an episode of “The Danny Thomas Show” in early 1960 to hand a ticket to Thomas’s character, a nightclub comedian named Danny Williams.

“You’ll kindly take a look at my name,” Danny says, handing Andy his license. “You’ll discover that I’m somebody.”

Andy glances at the license and says: “Well, you know, I knew that the minute I laid eyes on you. Yessir, I’ve never seen a car yet that wasn’t being driven by somebody.”

The episode became the basis for “The Andy Griffith Show” later that year. As that opening scene rolls on, Andy takes Danny down one peg, then another, then another. In three minutes Andy’s character is firmly established: a seemingly simple man who has a craftiness and common-sense wisdom that beat book learning any day. Sure, there were bumpkins on “The Andy Griffith Show,” including Don Knotts’s Barney Fife, one of television’s great goofballs, but there was a rock of clear country thinking at the core.

Not just any actor could have created Andy Taylor and sold him to the public during the unsettled ’60s, but Mr. Griffith made it look easy. He brought good looks and physical stature to the role, as well as a Southern accent that was strong enough to convey “country” but not so thick as to be off-putting to a national audience. (It also helped that the show was scrupulously uncontroversial and that Mayberry was a very white town; no reminders of the gathering racial storm there.) Eventually, the tumult and accelerated pace of the decade pushed “The Andy Griffith Show” aside, but not the notion that the moral center of the country lives somewhere in a small town.

Today, when you hear politicians and talk-show hosts spew platitudes about common sense and the wisdom of ordinary people, Andy Taylor is part of the collective memory they’re invoking. So is Ben Matlock, the homespun lawyer Mr. Griffith portrayed in another long-running series in the 1980s and ’90s.

Small-town mores are, of course, largely identified with Republicans these days, which shows you how good Mr. Griffith was as an actor: in real life he tended to support Democratic candidates, and he was once urged to run for the Senate against Jesse Helms. But never mind party allegiance; what would Andy Taylor have made of the deterioration in tone since he sat behind the sheriff’s desk in Mayberry?

Even the urban sophisticates who brushed up against Sheriff Taylor would have admitted that the fellow was always cordial and self-deprecating, never holier than thou. He knew he was smarter than they were, but he never let that register as a lack of respect. Andy Taylor, fundamental as he was, could never survive today as a character; he was too damn nice. Too bad.

A version of this article appeared in print on July 4, 2012, on page A1 of the New York edition with the headline: Sheriff Who Gave Stature to Small-Town Smarts.

Posted by GeorgesBays Positive Outlook at 11:08:00 AM