Five Mistakes You May Be Making By VERONICA DAGHER


Mistakes you are making now may sabotage your retirement later.

While not having a game plan for how you're going to retire by age 65 may not seem like a priority today, for example, the longer you delay planning hurts your chances of actually being able to achieve that dream.

Financial mistakes such as overspending and helping the kids too much may also increase the probability you'll run out of money before you die, say financial advisers.

Too many clients follow the conventional wisdom of contributing the maximum to their 401(k), never considering if this is the best move for their financial situation, says Robert Schmansky, a Bloomfield Hills, Mich.-based certified financial planner. 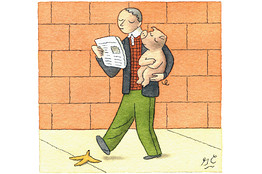 An investor's 401(k) might charge excessive fees, for example, and he or she may be better off investing some money in a Roth individual retirement account with more investment choices and lower fees, Mr. Schmansky says.

"It's important to look at your entire financial picture," he says.

"No financial plan means financial decisions are random," says Kevin Reardon, a Pewaukee, Wis.-based certified financial planner. While living for the moment and making decisions on the fly may feel good, a lifetime of doing so often results in insufficient savings and an overleveraged lifestyle, he says.

"Be concerned about not being destitute," he says.

Clients reluctant to plan can start by setting small goals such as saving 5% of their gross income a month and then gradually working up to saving 15% within 12 months for example, says Mr. Reardon.


3. Refusing to scale back.

For the past five years, Houston-based certified financial planner James Hoffman has encouraged a couple to downsize their home and boost their savings. The couple, now 67 and 66 years old, wish to retire in three years, but have yet to cut back. "They don't feel any urgency," he says.

That's a mistake, though, as situations can change unexpectedly and they may not be able to work for another three years, he says.

In addition, by not making changes to their lifestyle now, they'll likely find it more difficult to scale back their spending when they have no income and have no choice but to cut back later on.

Mr. Hoffman is working with the couple to find expenses they could trim now without too much pain—such as eating out two fewer times a week and socking that money away in savings.


4. Sacrificing your retirement to pay for the kids' college.

Recently a 55-year-old husband and his 54-year-old wife went to see certified financial planner Debra Morrison as they had just finished putting their last child through college and were now ready to save for their retirement.

"They were happy their children graduated debt-free but they were downright scared about their lack of retirement savings," says the Lincoln Park, N.J.-based certified financial planner.

This may be an extreme example, but too many parents are sacrificing their own retirement to fund their children's education, she says.

"College-loan programs abound, retirement financial aid does not," she says.

Ms. Morrison says while it's natural for some parents to feel guilty about not being able to help their kids more, the best gift to their children is to secure their own retirement so they won't need to lean on their children later on.

Ms. Morrison encourages parents to find "middle ground" with their children—offering to pay for books and commuting expenses, for example, or paying for two years at a state school.

If a child has his heart set on a college that's more expensive than what the family can afford, Ms. Morrison says, it's up to the child to find creative ways to meet that funding gap.

A widow Ms. Rehl recently worked with was forced to sell the family home and her two young children had to change schools because the family was unprepared for her husband's sudden death.

To avoid the "double shock" of grieving for a loved one and dealing with a new financial reality, Ms. Rehl advises clients to buy term life insurance on both spouses, create wills, and make sure both spouses are informed and ready to make financial decisions in case one dies.

Posted by GeorgesBays Positive Outlook at 7:56:00 AM