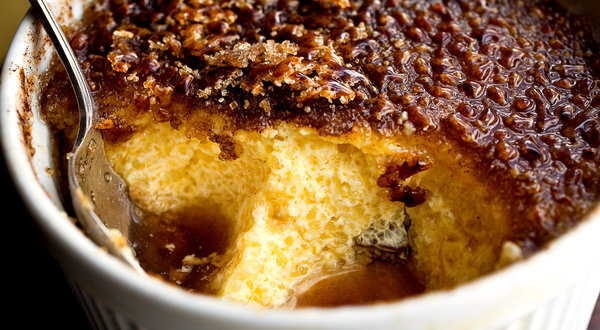 This tapioca pudding is baked, and its topping of Demerara sugar and cinnamon is quickly singed under the broiler, creating a crunchy brûlée.

“Chocolate pudding!” I gushed.
He shook his head and replied sharply: “This is not pudding. Pudding is that terrible stuff you Americans make with starch. This is pot de crème.”
Creamier, smoother, silkier and without any distracting grit from the starch, baked pots de crème, or custards, are superior to the stove-top-made cornstarch pudding in every way but one. The baked stuff does not form the same kind of slippery, sticky skin as the cornstarch kind. (All right, two ways: the baked custards take longer to make.)
As a pudding-skin lover, I find this lack slightly sad. But I bake mine anyway, because in all other respects, the custards are that much better.
One tricky thing about baking custard: the water bath.
The first time I ever used one, I filled a giant roasting pan with boiling water, then moved the hot, heavy, sloshing pan to the oven. The water rose in waves over the custard, ruining it before landing on my feet.
Since then, I’ve learned a few things about water baths.
The first is that you don’t need to use a roasting pan. One that’s just large enough to hold all your custard cups without their touching each other or the sides of the pan is ideal. I use a 9- by 13-inch pan for six to eight custard cups.
Second, don’t bother boiling the water; hot tap water works fine.
Finally, the baking time for custard varies immensely. The bigger your pan and the heavier your custard cups, the longer it takes. So use the baking times as a guide rather than the creamy gospel. When the custard seems as thick as applesauce but still wobbles in the center, it’s done. It will solidify in the fridge.
That said, not all baked custards need a water bath. Only two of the three I offer this week do, and both are worth the effort. One is a mildly spiced butterscotch custard that’s spiked with actual Scotch. The other is a dense, bittersweet chocolate pots de crème imbued with pistachio.
But I have to admit that the third recipe, a humble tapioca pudding, is my favorite. Classic tapioca is the rare American pudding that doesn’t have cornstarch, nor is it usually baked. But here, I bake it, mostly because it’s easier. Once it’s in the oven, you can leave it alone; on the stove it needs to be stirred frequently lest it scorch. Plus, I use pearl tapioca, which makes the pudding springy and fluffy, like a soft marshmallow.
Then a topping of Demerara sugar and cinnamon is quickly singed under the broiler. Served warm, the topping is a crunchy brûlée. But chilled, it softens, turning into the closest thing to a skin these baked beauties get. Which for me is the best of all worlds.
Posted by GeorgesBays Positive Outlook at 3:17:00 PM